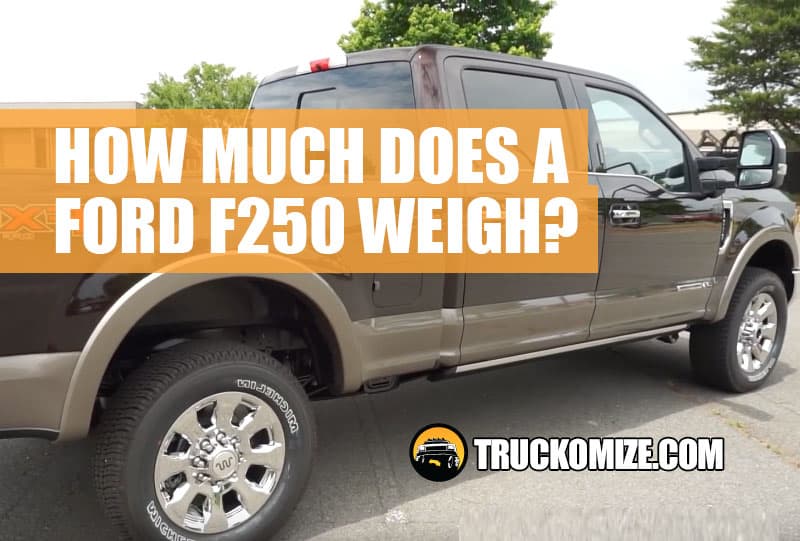 If you don’t know what your Ford F250 weighs, then you can never be 100% certain on how much you can load or haul with it. That’s where curb weight measurements come in, as they tell you what the weight of the truck is when it’s idle.

Below you can see a short answer to the question “how much does a F250 weigh” where I have put an average figure. Further down you can see specific model examples.

The average weight of a Ford F250 is 6586 pounds (curb weight). How much your particular F250 weighs will depend on year of manufacture, cab style, length, and whether it’s four or two-wheel drive. Curb weights of Ford F250 trucks differs from model to model.

So that’s the average Ford F250 weight, but how did I get to this figure and why did I use curb weight?

There are so many different models and specs, that I decided to go back as far as 2008, and cherry pick a few of the most popular models. That gave me 27 examples of Ford F250 weights – all of which you can see below.

Why did I decide to list F250 curb weights?

When a new truck rolls off the production line, it’s curb weight will be what it weighs in an un-modified state, with the standard equipment that Ford fit it out with.

Throughout the ownership of the truck, it might have had modifications and upgrades added to it, all of which can affect the curb weight, so if buying used, think about how this might have affected the manufacturer’s curb weight listing for your model and year.

The Ford F250 curb weight examples shown above is what the truck will have weighed when it was made, but taking into account a full tank of fuel, but no passengers or cargo inside.

Think of it as how much the F250 would weight if it was parked up at the curb, empty of gear and people, and you had just gone to the gas station.

The reason I listed curb weights (which aren’t the same as GVWR) is because it will be the most accurate weight you can get from the manufacturer. Your particular year and model could now be different depending on the history of the vehicle.

How to calculate the curb weight of a Ford F250

If you didn’t see your year and model listed, or you have made modifications to your ride, then there is a simple equation you can use to calculate curb weight.

Your truck’s GVWR can be found in the door pillar on the driver’s side. The GVWR is the maximum weight allowed for your truck once fully loaded with passengers and equipment. You can see how curb weight and GWVR differ in the graphic below. Why knowing your truck weight is important?

If you don’t know what your Ford F250 weight is, you can run the risk of putting too much strain on it. That makes for very dangerous driving.

As an example, whilst the braking system on the F250 range is very good, and has been tested extensively by Ford, if you are over-loaded, your stopping distances are drastically reduced.

You can also damage your truck and end up having to shell out a lot of money on repairs and fixes.

Common repairs required after over-loading a truck can include:

There are garages that offer truck weighing scales. Some local authorities also offer this service, or you might find a private weighing station near to you.

Before you weigh your truck, top of the gas and engine fluids first, as these are taken into account when measuring curb weight.

How much does a Ford F250 Super Duty weigh?

Due to the range of cab and bed lengths, you should consult the manufacturer websites for exact weight details of your model, spec, and year.

The 2016 F250 has differing curb weights depending on the model. Here are some examples:

How much weight can a Ford F250 carry?

There is a difference between carrying and towing. You can find out how much an F250 can tow elsewhere on the website.

In terms of carrying, you will need to know what your GVWR (gross vehicle weight rating) is. GVWR differs from model to model, so I recommend you read this guide to GVWR as there are calculations in that guide which will let you calculate how much you can carry.

Again, this will depend on your year, model, and spec.

Hauling and towing are the same thing and there’s a separateguide to F250 towing capacity which I recommend you read.

I hope you’ve now been able to find out how much a F250 weighs.

If your particular year and model wasn’t listed, I recommend you head on over to Ford’s official website or contact your local dealership for information – they tend to have historical documentation they can supply you.