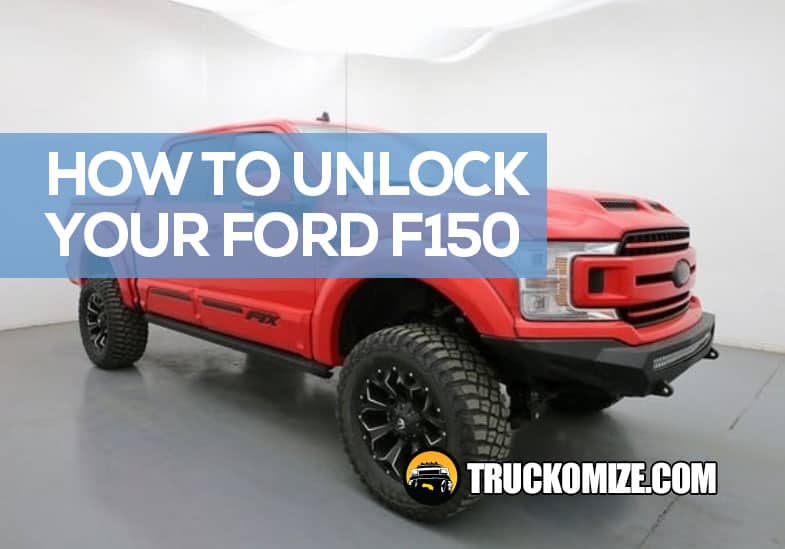 We’ve all been there; experiencing that sinking feeling as you realize you locked the keys inside your truck, or when your F150 has a dead battery. Either way, you need to open your locked F150 but have a thick pane of glass separating you from your keys.

How to unlock your F150 without the key?

There are a variety of methods to unlock a Ford F150 if something happened to your key. Most require the use of tools-and some re basic household items. Others are more advanced and are used by locksmiths.

So luckily, you won’t have to be shattering any windows to get inside or have to go through the hassle of waiting for and paying a locksmith just to complete a simple job. Or maybe you are the locksmith, in which case read on because these strategies apply to you, too.

I’ve explained the different methods you can use to figure out how to open a locked f150 in step-by-step detail below. Let’s dive right in, but first what will you need?

Unlocking an F150 with cheap tools and methods

As I previously mentioned, there are a ton of different miscellaneous tools to help you get into your locked F150. Some of the methods require some foresight planning as the tools are not typically just laying around, so it’s up to you to decide what to try out.

I highly recommend this method because of its simple process and relative ease. Auto Jigglers (view on Amazon)are simply key-shaped gadgets commonly used by locksmiths. Their technique is basically spelled out in the title, but I’ll break it down:

A tool as old as time and one of the more popular ways you can unlock an F150 without the key. Wire hangers work as great tools for this method but what works even better is this awesome tool on Amazon.

This unlocking method is more complex than the previous one I listed, so let’s get right into it:

The method varies depending on where you’ve inserted the wire. Let’s start with the top part of the window first:

If you’ve put in the wire from the bottom of the window, I recommend the passenger door instead because there are fewer cables than the driver’s:

If you’re more of a visual learner, check out the video below which gives you a better idea on how to open a locked f150 door without a key.

No, I’m not talking about the salty snack and I don’t recommend you try using that as it won’t get you very far. The Slim Jim I’m referring to is this unlocking tool on Amazon – designed to unlock F150 doors in super quick time.

Its strategy is fairly similar to the wire method and can be done from the back or front of your F150. You must be careful with this strategy as you could potentially deploy the side-impact airbags on a later model, and that will end up costing you a lot more than a locksmith would have charged.

Let’s start with the sliding back window as it’s less likely to cause damage:

The process is fairly difficult and may take several attempts, so don’t get discouraged if it doesn’t work right away.

Now we’re getting really crafty. No joke, this actually works – all you need to bring along is a string and some patience. You will need a sturdy and skinny string at least 36 inches long. A few examples of the ideal string that is both effective and easy to find are:

Once you’ve located one of these strings or something similar, you’re ready to really get things started:

You can also learn how to make a slipknot with this quick and easy video.

That’s all there is to it! It’s a simple and fairly easy process, and probably the most convenient if you don’t have any tools laying around.

I call this the paperclip method, but a bobby pin will get the job done too if you still want to know how to unlock f150 with dead battery. Unlike the previous few strategies, this doesn’t require any weird tricks to force the door open. Let’s get started:

To visualize the technique, watch this quick tutorial.

This method is essentially simulating the movement of a key. Using a jiggler key as I described previously is much more effortless, but we’re not always prepared for disaster, so keep this alternative handy.

This trick only works on older models of locked Ford F150s. If your windows aren’t all the way up, you can actually slide them down! Here’s how:

Will these unlocking methods damage your F150?

After soaking in all this information, you’re probably wondering how your beloved truck will be affected by the process. Not all of the methods are damage-inducing, but unfortunately some may cause some problems.

In the worst-case scenario, it will ultimately fall off and you’ll have to purchase and reapply a new one, unless you don’t mind air leaks.

The Slim Jim and wire hanger methods also require keeping the door ajar, as might the string method. The wedge, wire, Slim Jim, or whatever else may have rubbed forcefully against the side of the truck during the procedure could potentially scratch the paint off.

Continuing on-topic with the Slim Jim and wire hanger methods, if you use the tools on the bottom interior side of the door, you could latch onto the wrong piece and cause unwanted damage.

Alternatively, the auto jiggler and paperclip methods only require use of the keyhole and will not cause interior or exterior damage to your vehicle.

You’ll have to use your better judgement to decide whether these techniques are worth the time and effort. Sometimes the cost of a locksmith is less than the hassle that these methods require.

Are these F150 unlocking methods legal?

Breaking into your own F150 is not illegal. That being said, just because you know you are doesn’t mean everyone else is aware. You should always keep your registration on hand in the rare case that you’re accused of anything suspicious. Either way, it’s best to have your registration in the car for other emergency situations as well.

Can you use these methods on a vehicle that’s not a Ford F150? Absolutely. Should you use them on other people’s cars? Absolutely not.

How to stop yourself getting locked out

Now that you’ve experienced the agony that comes with being locked out of your F150, you probably never want to suffer that way again. How can you avoid this nightmare?

Newer F150 models will have numbered buttons on the driver door. Set them up with a number sequence that’s easy to remember and you’ll never have to worry about your keys again! Your driver’s manual should explain the instructions for the programming process.

If you can’t find the manual and don’t remember the factory settings, don’t worry. You can find the numbers by following these steps:

This short tutorial explains how to locate the factory numbers.

Naturally, keeping extra keys laying around will help when one of them is inaccessible. It’s more effective if you’re locked out of your F150 in your driveway or you’re close to home and someone can bring over a backup.

Otherwise, you could store one in a magnetic lock box connected to your car (if you’re not worried about thieves) or keep an extra key in your pocket if you’re up for the challenge.

Making a quick visit to your local locksmith to copy your keys is easy and inexpensive, and I recommend you take that extra effort.

If you always remember to keep your keys in your pocket or purse, you’ll never have a mishap. I know, this is obviously easier said than done, but training the mind to be more aware can really help you avoid accidents.

4. Use a retractable leash

If none of the above recommendations will cut it for you, try attaching your keys to a retractable leash that is also attached to your clothing. Then try leaving them in the ignition as you walk away. Not a chance! Your keys will literally be attached to the hip.

If this situation has happened to you time and time again and you just know these options are not going to work, consider subscribing to a remote unlocking company like OnStar. If you call for help, they will unlock your car on the spot.

So, there you have it. Some tried and trusted methods you can use if you want to know how to open a locked Ford truck when you don’t have the key or when the battery is dead. You might also like these other tutorials recently published with Ford F150 hacks: