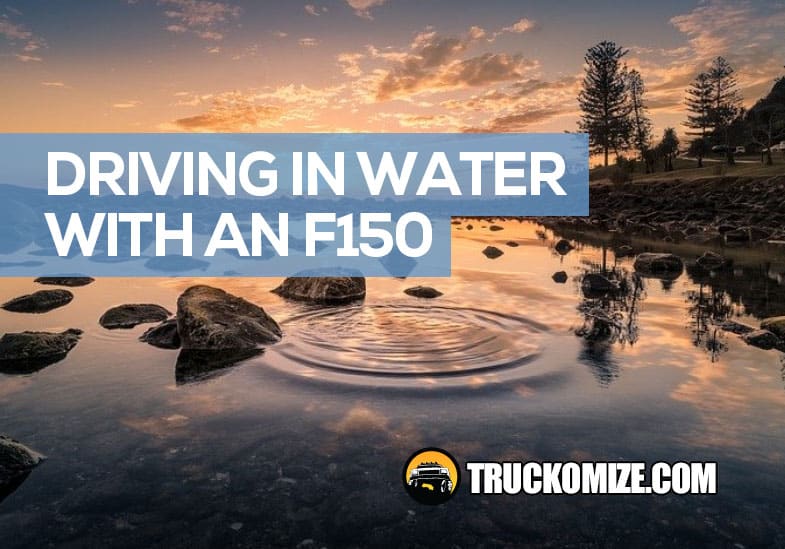 If you go off-roaring frequently or live in a rural area with dirt or poorly maintained roads, then you likely encounter areas of submerged and deep water frequently. As a Ford F150 owner though, you should be relatively comfortable as many come with features that make great at driving through water.

But what exactly do you need to know before you drive my F150 through water?

Before you drive your F150 through water, you will need to be aware of the potential depth of the water at its deepest point. You should not drive through water that exceeds the bottom half of the hub cap.

In this guide, you will find out how to determine the maximum F150 water fording depth that your truck can go through. What depth of water a Ford Raptor can drive through, plus a video of one being driving through a flood! You will also learn about the features that make the F150 suitable for driving through water in many situations.

I will also explain more about modifications you can make to your F150 to make it more suitable for driving through water and submerged sections of roads.

How deep of water can a Ford F150 drive through?

I want to preface this article by saying that you should always use your best judgment when it comes to driving through water. It is easy to be fooled when it comes to how deep the water you are about to cross actually is.

You need to take into consideration factors such as current and the condition of the ground surface underneath the submerged section.

This article is geared more so towards those planning an off-roading adventure than it is to those driving during times of heavy storms, which can give way to hazardous driving conditions.

What depth of water can a Ford F150 drive through?

There are several factors that can influence whether a Ford F150 can – or should – attempt to power through a collection of water. Here’s how you can calculate your F150 water fording depth.

The depth of water a truck can traverse is largely dependent upon the height of the wheels.

The following warning can be found in the F150 Owner’s Manual:

“Never drive through water that is higher than the bottom of the wheel hubs.”

In general, traction control involves the use of brakes and/or four-wheel drive mechanics to limit wheel slip and control the torque of the traveling vehicle to be transferred from the wheel to the ground surface.

If you own a recent model and year of the F150 4×4 truck, you will have some degree of traction control that will better help you traverse water puddles.

The traction control system in the F150 automatically turns on every time you switch the ignition on.

What’s the difference with the F150 FX4 package?

The F150 FX-4 is an optional off-road package available on the XL Mid, XLT, Lariat, King Ranch & Lariat 4×4 trims. The FX4 package holds an edge over trucks with standard 4×4 or rear-wheel drivetrains when it comes to driving through deep water.

This is because the FX4 off-road package for the F150 comes with:

The Ford FX4 package includes an electronic-locking rear differential. This system locks the rear axle completely in order to achieve enhanced traction at both wheels.

Conversely, open differential sends power from the engine to the axle allowing each wheel to spin at a different speed while turning a corner.

Electronic-locking rear differential allows both wheels to spin at the same speed. When the wheel has lost traction, both wheels will keep spinning no matter what resistance they encounter.

Often times, the ground submerged by the water will not be even. You will encounter uneven surfaces that you may not be able to tell are uneven before you enter the submerged section.

If you are using open differential in a situation where one wheel ends up dangling free in the air, then the open differential system will send all the power to the wheel, encountering the least amount of resistance. Then the wheel that is still on the ground will remain stationary.

In this same situation, but with locking differential, the one wheel that is still making contact with the ground will be able to rotate at the same speed as the wheel suspended in the air.

This will make it easier for the vehicle to break free from a situation where it has become stuck, such as a scenario where one rear wheel is suspended over the edge of a ditch full of water.

Will lifting my F150 let it go in deeper water?

Lift kits are popular among truck owners looking to customize their rides. Lift kits are often approached as a flashy accessory to the truck experience, but they can serve a functional purpose as well.

Lifted suspensions enhance the off-roading experience by increasing the depth of water the truck can safely pass through.

Keep in mind that any modifications you make to a vehicle to make it more suitable for mud or water will also come with their drawbacks.

Lifting the suspension can have the following drawbacks:

If you are looking to use your F150 truck for mostly off-roading purposes, installing a lift kit will increase the depth of mud and water you can go through.

The Ford F150 Raptor, built for off-roading, has been designed to operate in the water of depths up to 32 inches.

However, the Ford F150 Raptor’s owner manual states that as water depth increases, the vehicle speed must be decreased in order to avoid damaging the vehicle.

How much water can a Ford Raptor drive through?

These are the recommended maximum speeds for varying water depths according to the owner’s manual:

Similar recommendations apply to other trims and packages of the Ford F150, where you will need to reduce speeds when going through water in order to prevent causing damage to the vehicle.

For more information on what your Ford F150 can do, check out these other blog posts: