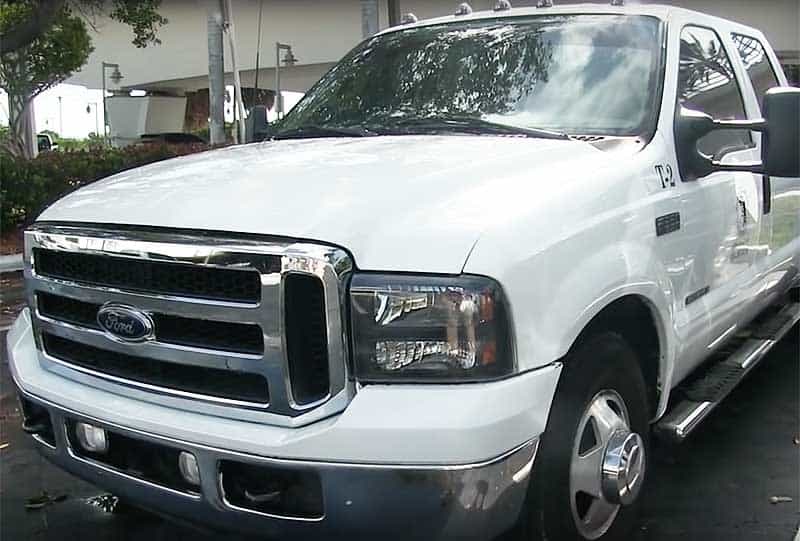 As a Ford F350 Dually (Super Duty) owner you might be looking for information on how much it weighs. Perhaps you are going to be carrying a large load, or pulling a trailer, and need to calculate what the payload capacity is once the GVWR and curb weight has been taken into account.

What I’ve done here is offer some very rough guidance on the Ford F350 Dually weight, having looked at various online specs and forums.

Here are 10 examples of what a Ford F350 Dually weighs based on forum responses I have seen on the web today.

Above I have tried where possible to list the curb weights, in other words when it’s empty of any load or passengers. I did think it was also useful to add in some other weights where the owners of the trucks have done their own modifications.

So, if we look at an average of those Ford F350 Dually weights where I’ve found the curb weights (in other words when empty), we’re left with a figure that looks something like this:

Curb weight is how much a truck weighs when it’s free of any load, baggage, cargo, or people. It’s a common weight metric that the dealers will advertise on the truck’s spec when up for sale.

Before you simply take my word for it, there are always going to be variations in the weight of your specific Ford F350 Dually, depending on the exact spec, year, and model you’ve got, so only take the above average as guidance only.

But, depending on the individual configurations and modifications that might have been done, could mean that your Ford F350 Dually weighs a lot of different – especially if you bought it used and it’s had some previous modifications and adds-on.

Another way to ascertain the Ford F350 Dually weight is to take a look at the GVWR (click here for a definition) and payload stickers that are typically found in the driver’s door jamb.

To use that calculation in a real-world example, let’s say the GVWR (gross vehicle weight rating) of your Ford F350 Dually comes in at 9,200 pounds, with a payload capacity of 1,900 pounds.

You would subtract 1,900 pounds from 9,200 pounds, which would then give you 7,300 pounds of empty weight – in other words the curb weight of your Ford F350 Dually as it was when it left the factory floor.

How Much Can a F350 Dually Carry and Hold in the Bed?

This is where you need to aware of the differences between GVWR, payload, curb weight, and towing capacities.

I’ve put together guidelines which help you calculate how much a F350 Dually can carry, and you can read that in this guide to payloads, but it’s actually pretty straightforward.

This is how you know how much it can hold in the bed and carry in 3 simple steps:

Yes, it does, and the reason being is that it is designed to handle more weight itself than the F150 and F250 range. To do so, it needs to be heaver with an increase in weight.

Why Weight Knowledge is Important?

No matter what type of truck you own, if you’re planning on towing or carrying large and heavy loads, you need to be up to speed with your weights.

That means understanding the differences between GVWR and GCWR, knowing what your payload capacity is, and ultimately understand how much your truck weighs at the curb.

If you don’t know all this and get it wrong, you can not only damage your truck, but also be a danger on the road as stopping distances will get longer, and brakes can even fail.

Don’t be that guy and please be safe.

Handy Hint: To see different F350 models and how much they weigh, please click here.